At block number 525,960 the Safex cryptocurrency (SFX) mining reward will increase from 130 SFX per block to 200 SFX per block. This is the second mining reward increase in the series. The change of the block reward is a fundamentally important event since it has an influence on the market price, mining cost and mining profitability.

The cryptocurrency of the Safex protocol that is used to pay transaction fees and settle purchases on the marketplace is distributed through a proof of work mining algorithm. The monetary base curve is designed to mirror the adoption curve and as a result to be attractive for new miners joining the network especially in the first few years of increasing block rewards. While most people will discover Safex over time (the natural adoption of new technology) the rewards follow that adoption to give a level playing field for new miners and to reward existing miners with increasing block rewards.

The current Safex Cash (SFX) block reward is 130 SFX per block and will increase to 200 SFX per block in the near future. The resulting increased mining profitability will very likely affect the market price and the total network mining effort which will be discussed and illustrated in this article.

Relative Reward Increases based on the Coin Emission Schedule

In a previous article published by the Safex foundation - Safex Mining Innovative Currency Distribution Algorithm: The S-Curve - the monetary base history was being focused on and compared with the one of other cryptocurrencies. Based on the coin emission rate that changes from year to year, the yearly relative changes of block rewards can be examined.

Generally, it can be said that the phase of increasing block rewards results in a favorable situation for new miners joining the network. The block reward increase results in a jump of mining profitability under the assumption of a constant market price of the mined cryptocurrency and a constant total mining effort within the network.

The upcoming marketplace protocol being launched on mainnet would then be a catalyst for new demand for the Safex cryptocurrency since vendors will need it to list new offers, and new buyers will need to stock the Safex Network currency in order to purchase the items they want. So far this dynamic has not been a factor until recently since the marketplace protocol has been in ongoing development.

The increase of block reward drastically changes the mining profitability within a very short time frame. Now, different scenarios can play out based on game theory:

The calculation of the mining profitability based on the relevant parameters was discussed and illustrated in a previous article published by the Safex foundation - The Economics of Mining: Calculating your cost basis and P/L.

In a scenario of constant market price and constant mining effort the mining cost would drastically decrease after the block reward change. This would then result in a drastically increased mining profitability. It can be seen that the equilibrium of market price and mining cost would majorly shift towards a significantly higher mining profitability which makes it a rather unlikely scenario to be sustained in the long-term unless an equally increased demand for the Safex currency was to become present. This could be as a result of new avenues to acquire the cryptocurrency, new technological breakthrough such as the marketplace protocol launch, and outreach to new interested users, among many other outcomes that could drive demand.

In a third scenario the market price is remaining constant and the mining effort gradually increases. It can be seen how the mining profitability rises sharply and then gradually goes down again in order to level out at a value similar to the one before the block reward increase.

The fourth scenario is a combination of the second and third scenario. The two forces that bring down the mining profitability to a lower level again after the sharp increase - increased selling pressure caused by highly profitable miners, increased total mining effort caused by new miners - are working together here.

The phase of increasing block rewards in Safex Cash's monetary base scheme is favorable for new miners joining the network, and new users eager to transact on the Safex Marketplace (TWM). A time window of increased mining profitability is existent in a specific time interval after each block reward increase. Depending on the strategy of the market participants - miners who sell parts of their rewards based on their mining profitability and/or new miners joining the network as well as existing miners adding new mining hardware - an equilibrium of a new market price and new mining cost at a constant mining profitability can be expected to develop within some time after the upcoming block reward increase. 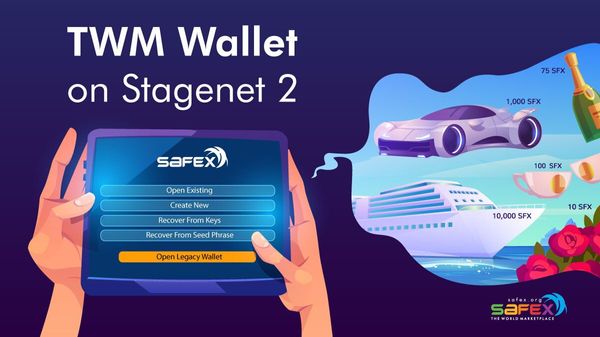 Stagenet 2, the final frontier ahead of mainnet is now live and this article goes over the functionality of the TWM Wallet which peers into the world marketplace at Safex. Follow this for a tutorial how to use the new wallet. 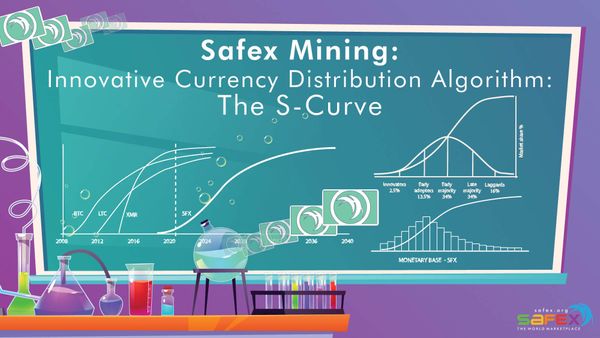 Diffusion of Innovation Theory is the driving force behind the equitable distribution of the Safex Cryptocurrency via Proof of Work mining.