In order to earn a net profit via cryptocurrency mining, the mining profitability has to be positive. The mining profitability is dependent by the market price and the mining cost of the cryptocurrency. Staking has generally a lower cost per earned unit than mining. Mining, as well as staking, can be either pursued with self-owned hardware or via a third party service provider. Different factors have to be considered in order to decide whether mining or staking will be a profitable investment short-term and also long-term.

For staking, the initial costs are generally minor compared to mining. Staking can be either done with a self-hosted node at home, with a node set up on a virtual instance by a third party infrastructure provider or by using a smart contract. In contrast to mining, the initial staking balance majorly determines the reward.

The price of electricity

The main factor that is defining the mining profitability - especially in the short-term -  is the price of electricity used by a self-owned mining rig. Many countries charge electricity at lower prices to encourage economic growth. Also, the rates for businesses and private persons can significantly differ. Today, most industrial miners do their business in countries that offer electricity at a low price on power purchasing agreements. On the other hand, most retail miners have to calculate retail price fluctuations when planning their investments. Since cryptocurrency mining has developed into a highly competitive business all around the world, the most profitable miners determine the average profitability and can force other less-profitable players out of the business when they can't compete anymore.

The cost of the mining hardware setup

A significant cost factor that has to be included into the mining profitability calculation is the price of the complete mining hardware setup. These prices tend to fluctuate in cycles with periods when buying equipment is relatively affordable and those toward each hype-cycle's peak when equipment may not only be unaffordable but also unavailable. The price of hardware also varies from manufacturer to manufacturer and depends mostly on the amount of computing power it produces on lower energy consumption. The more computing power a machine produces, the more cryptocurrency you will mine. Also, the lower the setup's energy consumption, the lower your monthly costs will be.

To sum it up, you should decide your setup based on the following factors:

When all parameters are known and the desired cryptocurrency to mine has been decided on, it is possible to set up a complete mining profitability calculation.

Cloud mining via a third party

Cloud mining involves purchasing time on someone else’s machine. Companies charge cloud mining based on the hash rate (processing power) of provided hardware. The higher the hash rate of the machine you rent is, the more coins you can expect to mine but you will also pay more. Some companies require you to pay a monthly fee while others require a year-long contract.

Cloud mining comes with its own set of benefits. For example, mining on someone else’s machine means you don’t have to worry about the reliability of your electricity infrastructure and rate or the initial cost of the hardware setup. On the other hand, in case you sign a year-long contract and the price of the cryptocurrency you are mining decreases, you will be stuck in an unprofitable contract for a long time.

Some digital currencies go through emission cycles with events such as block reward halvings. Such a halving occurs when the amount of cryptocurrency entering circulation as a block reward within time - also known as emission rate - is reduced by half. When the amount of new supply entering the system suddenly drops, the cryptocurrency’s price will be driven up as long as the demand remains constant. The time after the halving is crucial for miners, since the profitability drops rapidly until a market price increase of the currency makes up for the reduced block reward again. During this time, miners are mining with reduced profitability or even at a loss and may capitulate as a result. In the case of Bitcoin, halvings occur every 210,000 blocks, which is around every four years, until the maximum supply of 21 million Bitcoin has been mined - probably in the year 2140.

An example for a cryptocurrency with an equitable mining algorithm - enabling profitable mining with a home CPU - in it's early phase of emission is the privacy-focused PoW currency Safex Cash (SFX). The coin emission follows an S-shaped curve which makes it attractive for new miners to join the ecosystem especially in the first few years. Towards the end of the regular coin emission, the emission rate decelerates again. This pattern is designed to follow the adoption of the currency.

Ethereum mining has been and probably will be near the top in the digital currency space when it comes to cryptocurrency mining. This is not only because of the block rewards but also the transaction fee revenue for the miners as the use of the protocol is steadily increasing. However, Ethereum’s blockchain has a somewhat different purpose than Bitcoin’s. Ethereum is a smart contract protocol, which means that although mining has supported the network during the phase when it wasn’t widely used for transactions, the network’s future lies in taking on staking nodes as validators to provide sufficient transaction capacity. Since the regular mining will probably be phased out gradually and a substantial amount of coins will be locked in staking, this may drive up the price in the long-term.

Staking is a mechanism where users deposit some of their coins into a staking address that is owned by a validator node and lock them for a certain period. The node then secures the network by producing blocks relative to the number of coins deposited and the staking reward is then calculated based on the total amount of coins staked in the network. An example for a service provider that lets you stake any amount of Ethereum and temporarily gives out a placeholder token for the staked ETH which can be used for various purposes in return is Lido.

For the majority of PoS blockchains, the annual percentage rate (APR) can be predicted quite well based on parameters set in the code and the number of staking participants. Generally, the staking rewards are paid out in the same currency as the staking deposits which results in an inflation of a staker's cryptocurrency.

The Safex ecosystem does not only give an opportunity to CPU miners, it also introduces a completely new way of staking and earning cryptocurrency. Although being a 100% PoW network, the Safex Token (SFT) allows users to stake and earn cryptocurrency on the Safex blockchain via a staking mechanism which does not contribute to the consensus mechanism of the chain.

Safex - being considered the best Shopify alternative - has embedded the Safex Token (SFT) into its blockchain which serves to allow users to create accounts based on blockchain eCommerce technology and do online shopping with cryptocurrency. However, Safex Token also allows its holders who lock (stake) their tokens to participate in revenue sharing of the Safex platform. It is a utility token created to provide incentives to the community to support the development of the Safex marketplace. The proportional reward is determined depending on the amount of Safex Token one locks. In this unique way of staking, the staking reward is not paid out in the staked currency itself which is therefore not affected by inflation. Also, the annual percentage yield (APY) is not set by the protocol independently from transaction traffic but defined by the use of the protocol.

Cryptocurrency mining is not only a way to set up a profitable business or make a profit in smaller scale. People who care about their privacy can also use it as a way to receive cryptocurrency with no prior history and without the need to register on a cryptocurrency exchange at all. This means economic freedom since the currency is not tied to a specific entity. This feature is only present in equitable proof-of-work cryptocurrencies such as Safex Cash (SFX). This goes also for staking cryptocurrencies with the difference being that already wealthy stakers will also receive significantly higher rewards.

On January 3rd, 2009 Satoshi Nakamoto, the inventor of Bitcoin, became the first cryptocurrency miner in history. Due to very low competition in the early years of cryptocurrencies and the specific emission schedules, miners were able to accumulate large amounts of Bitcoin and other major cryptocurrencies. Today, mining has become a highly competitive industry. Mining as well as staking of cryptocurrencies with significant utility value and a projected increase of adoption can be expected to remain a profitable business for years to come. 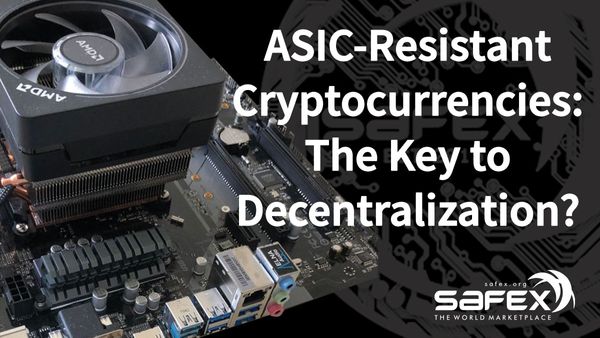 ASIC resistant cryptocurrencies aim to preserve and increase their underlying PoW blockchain's degree of decentralization. While it was possible to profitably mine Bitcoin with a CPU after its launch, times have changed and specially designed hardware has taken over for certain mining algorithms. 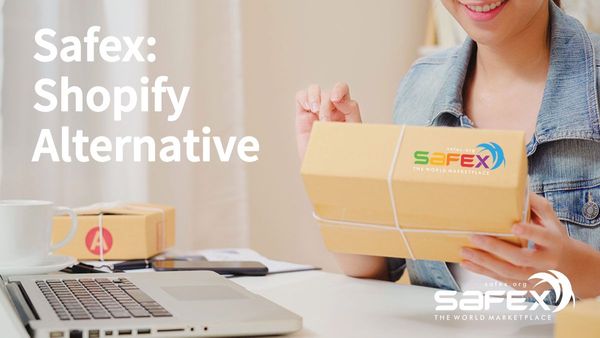 The popular eCommerce platform Shopify may offer many beneficial features to online shop owners and businesses. However, there are still left disadvantages that come with the use of such a centralized platform. Safex - a decentralized marketplace app fueled by cryptocurrency - offers an alternative.